Technology enables access to, in near-real-time, very large amounts of information relating to aspects of the operational environment (OE)
Information is of greatest value when it contributes to the decision-making process by providing reasoned insight into future conditions or situations.
Raw data by itself has relatively limited utility. However, when data is collected and processed into an intelligible form, it becomes information and gains greater utility.

What systems, data, and other digital assets must be protected?
How do you anticipate threat intelligence will help protect those assets?
With which specific tactics are you expecting intelligence to help?

A conceptual model of the intelligence process

Operational – Senior Leaders; Managers
Focus on capabilities and intentions of threats and vulnerabilities
Analyze the operational environment.
Identify adversary centers of gravity and critical vulnerabilities.
Monitor events in the areas of interest.

Tactical – Managers
Support the planning and conduct of joint campaigns or efforts.
Support planning and the execution of attacks, defense, engagements, and other joint force activities.
Provide information on imminent threats and changes in the operational environment.
Provide obstacle intelligence. 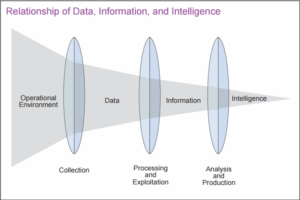 There is a difference between threat data, information, and intelligence; understanding the difference is essential to getting the most out of your threat intelligence platform. The progress from data to information to intelligence, reduces the volume of outputs while the value of those outputs simultaneously increases.

Action must always be the end goal. Threat intelligence is useless unless it can be used to improve action, in this case; cyber security action.

Most organizations assume that if they buy a threat intelligence platform it will do everything for them – that isn’t the case – there are critical differences between threat data, information, and intelligence, and skilled analysts define the transition from one to the next.

The main differences between data, information, and intelligence come in two forms: volume, and usability.

Data is typically available in huge volumes, and describes individual and unarguable facts. Details of individual connection requests are an excellent example of data, because they’re simple statements of fact and aren’t open to discussion.

Information is produced when a series of raw data points are combined to answer a simple question; although this is a far more useful output than the raw data, it still doesn’t directly inform a specific action.

Intelligence takes this process a stage further by interrogating data and information to tell a story (a forecast, for example) that can be used to inform decision making. Crucially, intelligence never answers a simple question, rather it paints a picture that can be used to help people answer much more complicated questions. Intelligence may not directly answer a specific question, but it does aid in the decision-making process.

An important function of threat intelligence products is to organize threats according to their potential to damage an organization. This is where the very best providers differentiate themselves from the rest of the pack: They’re able to prioritize threats automatically, so human analysts can focus their efforts on the most important threat data or information first. Because of the big data issues described above, having a tool that can prioritize threats is essential. If your analysts are digging through every single threat manually, you’ll find that many urgent threats aren’t identified until after the fact. The process of combining and organizing threat data into threat information is fundamental to the prioritization process.

When it comes to threat intelligence, action is the only thing that really counts. There’s absolutely no value in possessing threat data, information, or intelligence unless you use it to improve your security program or defend against an incoming attack.